I am a huge cinnamon roll lover, but have never really taken the time to make them from scratch. When I don't just buy the Pillsbury tubes, using crescent rolls is about as close as I get. ;) 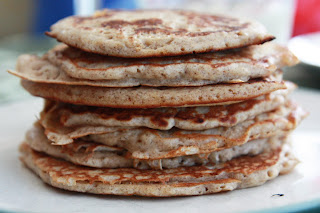 Luckily, I discovered this recipe on Tasty Kitchen which gives me huge cinnamon roll flavor without the work. My husband usually makes us awesome chocolate chip pancakes on the weekends, but this time I kicked him out and took over pancake duty.

These were delicious, though I think I was too caught up in the icing issue. See, when the recipe was reposted on the Tasty Kitchen blog, it came with a yummy sounding icing. However, the quantities were not included so I had no idea how much of anything to mix. I tried adding little bits at a time, but the results were just not right at all.

I later learned that the right quantities were listed below in a comment - wish I had seen that earlier! I think, however, that next time I make these, I will try a cream cheese icing. Mmmmm. 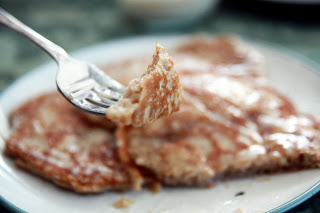 Ingredients
For the icing:

In medium bowl, combine flour, sugar, salt, baking powder and cinnamon with a whisk. Whisk well to make sure everything is combined.

Heat a lightly oiled griddle or frying pan over medium/low heat. Pour about 1/4 cup batter onto griddle. Brown on both sides.

To make the icing, whisk all ingredients together until smooth.

Serve warm with icing drizzled over the top.