This is a very belated post.  I made this cinnamon ice cream back in November so that our Thanksgiving pies could be served a la mode, and it was delicious.  I had tried a different recipe last year and it was WAY too strong; this one was perfect.  I actually just used the leftovers yesterday morning in a Frosty Latte while the kids turned the family room into a wrapping paper museum. 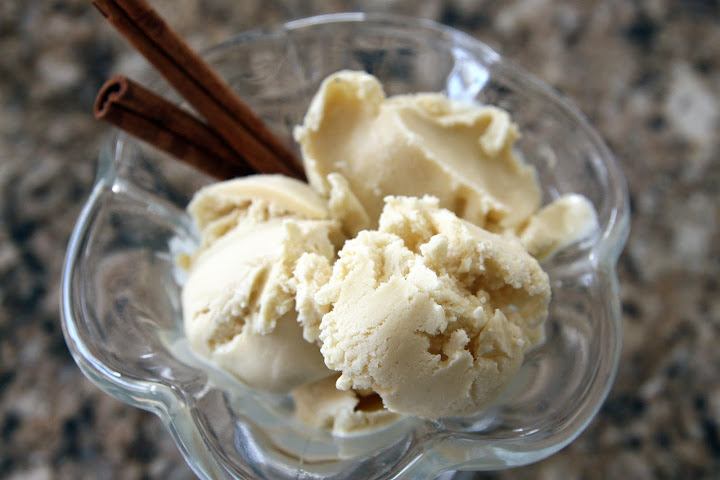 Cinnamon Ice Cream
from Pennies on a Platter

Warm the milk, sugar, salt, cinnamon sticks and 1 cup of the cream in a medium saucepan. Once warm, cover, remove from the heat, and let steep at room temperature for 1 hour.

Rewarm the cinnamon-infused milk mixture. Remove the cinnamon sticks with a slotted spoon and discard them or save them for garnish and presentation. Pour the remaining 1 cup cream into a large bowl and set a mesh strainer on top.

In a separate medium bowl, whisk together the egg yolks. Slowly pour the warm mixture into the egg yolks, whisking constantly, then scrape the warmed egg yolks back into the saucepan.

Stir the mixture constanly over medium heat with a heatproof spatula, scraping the bottom as you stir, until the mixture thickens and coats the spatula. Pour the custard through the strainer and into the cream. Stir until cool over an ice bath.

Chill the mixture thoroughly in the refrigerator, then freeze it in your ice cream maker according to the manufacturer’s instructions.

Okay, so it's winter.  Whatev.  This yummy chili is still perfectly relevant for these dark winter evenings, and a great way to use any cans of pumpkin from your Thanksgiving stash.  There's perhaps nothing as comforting to eat for dinner than a warm bowl of chili! 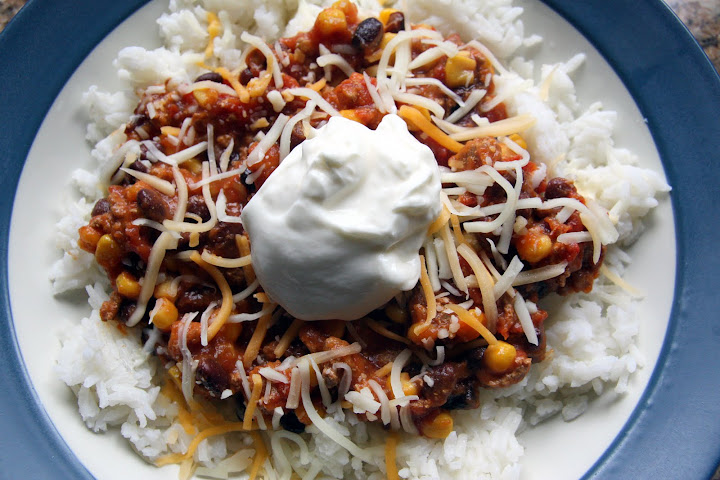 Turkey Autumn Chili
from The Crockpot Blog
Combine all ingredients (except for toppings) in a 6qt slow cooker.  Cover and cook on the low temperature setting for 10 hours.

This delicious little drink is precisely the reason I made Eggnog Ice Cream in the first place. It's simple and decadent and would be perfect for entertaining this holiday season. You can, of course, make it with any flavor ice cream; I think a nice peppermint flavor would hit the spot as you're finishing your wrapping or watching the kids dig into their treasures.

I should note that it's imperative you use cold coffee! I completely messed up poor Brooke's demonstration by forgetting to brew the coffee in time to chill it. The result was a luke-warm concoction that tasted awesome but felt really weird. 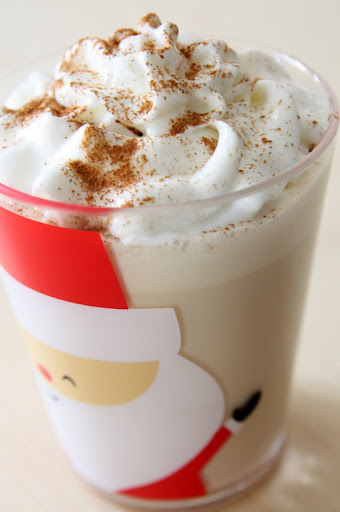 This delicious dinner started making its way around an online mom's group I frequent, and I added it to my menu as soon as I saw it. This faux lasagna might not be the best weekday meal due to the simmering and baking time, but it's perfect if you can prep it ahead of time or wait until the weekend. It's easy and delicious, and it feeds an army - it fed my family of four plus gave me lunch for a couple of days. 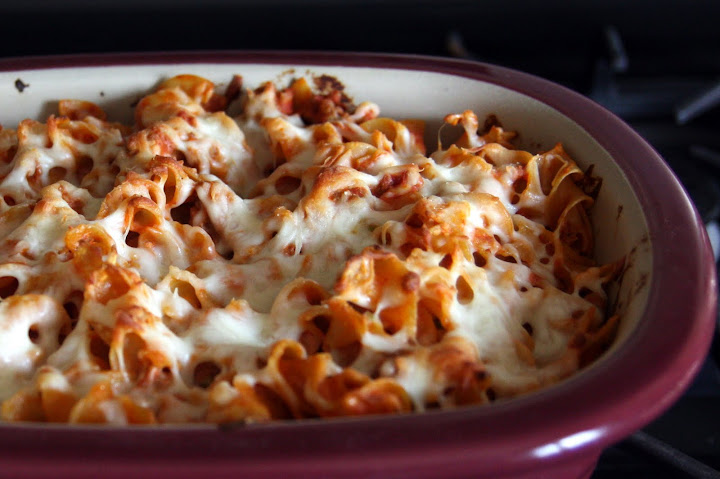 Sauté the meat until lightly browned in a large skillet over medium heat, breaking it up as it cooks. Add the tomato paste, tomato sauce, and sugar. (Next time I will add salt too) Fill the tomato paste can with water and stir it in. Simmer, covered, for 15 to 20 minutes.

Fill a large pot with water, salt it, and bring it to a boil. Add the egg
noodles and cook them until tender. Drain the noodles, then return them to the pot. Stir in the butter.

Mix the sour cream, cream cheese, and scallions in a small ­bowl. Make two layers of the ingredients in a large casserole dish, as follows: Spread a little sauce over the bottom of the dish, top with a layer of noodles, then spread half of the sour cream mixture and half of the meat sauce. Repeat these steps. Top the lasagna with the sliced cheddar.

Bake for 45 to 50 minutes (I only baked it for 30 mins), until the lasagna mixture is bubbly and the cheese is lightly browned.

Email ThisBlogThis!Share to TwitterShare to FacebookShare to Pinterest
Labels: Pasta

A couple of weeks ago, Brooke did a Pampered Chef show at my house. One of the recipes she demo'ed was an awesome Iced Eggnog Latte, and she needed eggnog ice cream to do it. I never pass up a chance to make my own ice cream, so after a quick google search, I had a delicious treat churning away on my counter. 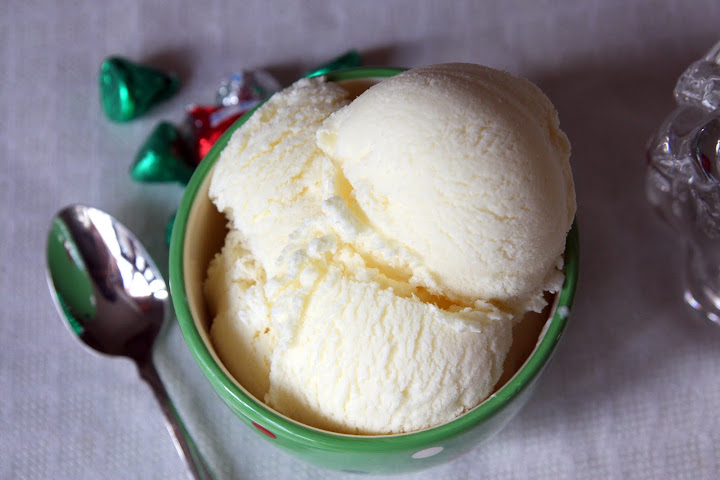 I will post the latte recipe soon, but for now, enjoy the ice cream. I'm sure it will make a lovely addition to your holiday dessert table.

Mix the eggnog, whipping cream, and milk together in a bowl, and pour the mixture into the freezer container of an ice cream maker. Freeze according to manufacturer's directions. Once frozen, spoon the ice cream into a container, and freeze 2 hours more.
1 comment:

My sister-in-law bought me Slow Cooker: The Best Cookbook Ever for Christmas last year, and I LOVE it - the title is totally appropriate.  I use it often because, as we all know, I love my crockpot.
I didn't waste any time using it, and prepared the Sausage and Hashbrown Casserole for a brunch on New Year's Eve.  Yes, I'm a bit late in posting this; I'm planning my menu for this year's brunch, and it occurred to me that, though I've made this several times since, I've never posted it on my blog. 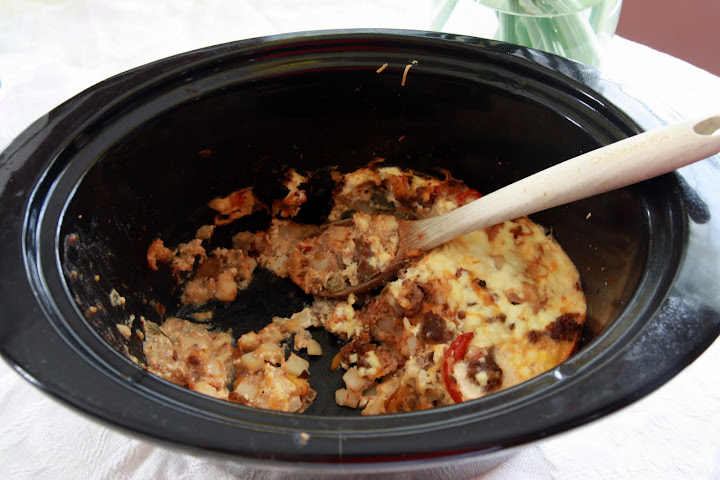 The photo isn't overly attractive, as is usually the case with crockpot meals, but the taste is outrageous.  It is so good and has been quite a crowd-pleaser.  It's perfect for company because you do a little bit of prep ahead of time and then dump it in the crockpot while you can tend to other dishes - or just relax on the couch with a mimosa.
(I usually ditch the layering part of the directions and just kind of mix it all up.)
Sausage and Hash-Brown Casserole
Slow Cooker: The Best Cookbook Ever
Coat the inside of a 5- to 7-quart slow cooker with nonstick cooking spray or line the insert with a slow-cooker liner according to the manufacturer's directions.
Cook the sausage in a large skillet over high heat until it is no longer pink, breaking up any large pieces with the side of a spoon.
Remove all but 1 tablespoon of fat from the pan and heat over medium-high heat.  Add the onions, chile bell pepper, cumin, and oregano and saute until the onions are softened and translucent, 5 to 6 minutes.  Transfer the mixture to a bowl and allow to cool.
Add the potatoes to the bowl and stir to blend.  In a smaller bowl, whisk together the eggs, milk, and mayonnaise.  Pour over the sausage and potato mixture and stir to combine.
Transfer half the mixture to the slow-cooker insert, then cover with half the salsa and half the cheese.  Repeat the layers with the remaining ingredients.  Cover and cook on high for 2 1/2 to 3 hours, until the casserole is puffed and cooked through (170 degrees on an instant-read thermometer).  Remove the cover and allow the frittata to rest for 30 minutes.
Serve from the cooker set on warm.
4 comments:

About a million years ago, I signed up to be a part of The Nest's "Test Kitchen" - I wasn't selected for the first round, but in July (like, 5 minutes before we moved!) I was contacted to be a part of a second installment.
The Nest Magazine sent me this recipe for Delicatessen Slow Chili... along with the All-Clad Metalcrafters Soup Pot (for which I canNOT find a link).  Sweet!
So I stumbled around boxes and packing tape and donation piles and created our last real meal in our little townhouse.  There's something kind of off about eating chili in July, but it was one of the best chili's I've ever made. 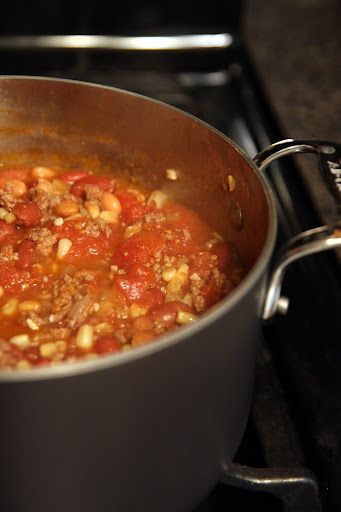 The recipe/giveaway was a part of their Fall 2010 issue, but alas - my photo and comments ended up on the cutting room floor.  Booo.  (Do magazines have a cutting room floor?)  However, not only did I snag an awesome new pot (which I highly recommend - I use it ALL the time!), but to make up for it, The Nest Magazine gave me another go-around with a new recipe for their Winter 2010 issue - I can't wait to blog about that one too, once the issue is out. 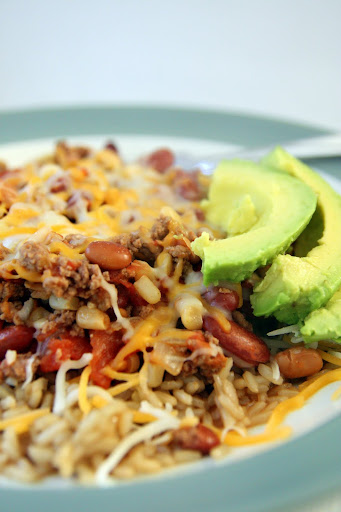 I couldn't find a link to the recipe, so I'm typing it out as it appears in the magazine, with my changes in parenthesis.  Don't be put off by the number of ingredients; we all probably have 90% on hand (or appropriate substitutions).
Delicatessen Slow Chili
Recipe courtesy of Chef Michael Ferraro, executive chef at Delicatessen in NYC
Season the pork and beef with kosher salt and pepper.
Heat pot over high heat.  Add oil and then the pork and beef.  Cook for 10 minutes until browned.
Drain off excess oil and add dried seasonings.
Remove meat from the pan and set aside.
Add the onions and minced garlic to pot and cook until tender.
Add chipotle en adobe and roasted garlic.
Add the meat and the rest of the ingredients and cook over a slow simmer for 2 hours, continuously skimming excess fat.
Taste and add final seasoning of salt and pepper.
Serve with desired toppings.  (I served this over rice.)
No comments: