I love pasta.  Love it.  I'm sure you've figured that out, though, since I probably say that in 50% of my blog posts about pasta.
This Chicken and Chickpea Salad was not only delicious, but also my first time using Dreamfield's pasta.  Prior to this, my head threatened to explode every time I even considered spending almost $3 for less than a pound of pasta.  But finally I decided to go for it... I figured if I'm eating pasta this often, it may as well be a little good for me.
Although I could taste a slight difference, it really was pretty close to the taste of regular white pasta.  Try as I might, I cannot get myself to like whole wheat pasta, so this is a nice alternative.
I'm sure this salad will be even better in the spring and summer, but for now, it's a yummy dinner and I feel less guilty bringing the leftovers to work for lunch. 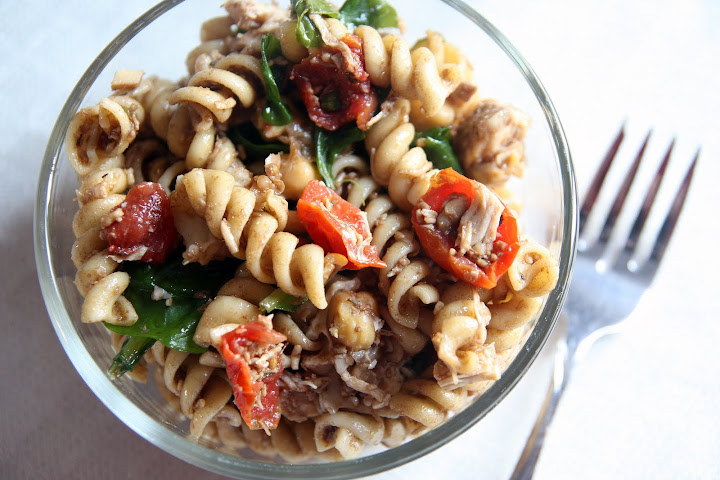 Chicken and Chickpea Salad
slightly adapted from Christine's Cuisine; originally from Get Cooking

Make pasta according to box directions. Drain and add to chickpea mixture.

I decided to try to tackle some of the remaining baby weight (yes, it's been a year and a half - so what) by joining a "biggest loser" competition at work.  I'm not dieting, per se, but just trying to be a little more aware of what I eat.  Pop-Tarts for breakfast are probably not the healthiest, so I'm trying to make some subtle changes to my intake.  Hopefully, a few pounds will fall off in the process.
I was intrigued by this crustless quiche on my friend Melissa's blog, because it just seemed like a filler-upper kind of meal.  I doubled and slightly changed her recipe; not only did I have a yummy dinner, but this left me with a few days' worth of breakfasts too.
I just love how versatile it is.  You can really throw in whatever you have in your fridge or pantry - you probably always have enough stuff to make this. 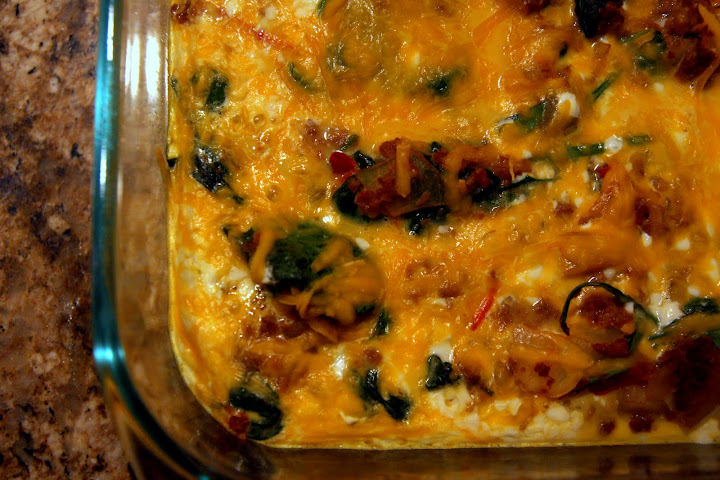 Crustless Quiche
adapted from I Was Born to Cook
Preheat oven to 325 degrees and spray a 13x9 baking pan.  Heat a little bit of olive oil in a skillet (or use a cooking spray) and add onions.  Cook for about 3 minutes until they begin to soften.  Add tomato, scallion, and spinach to the pan, then vegetarian crumbles.  Cook on low until onion is translucent.  Transfer to prepared baking sheet.
Beat eggs with sour cream and pepper, then add to baking pan and top with cheese.  Bake for about 30 minutes or until cooked through.
1 comment:

One of the best things about having mom-friends is that you're all in the same boat with the same priorities.  As much as we love to cook, no one wants to spend hours in the kitchen prepping dinner when there are too many games of Uno to be played or pages to be colored or Lego towers to be built.  Yet, of course, it is important to keep our families' bellies full of nutritious food. 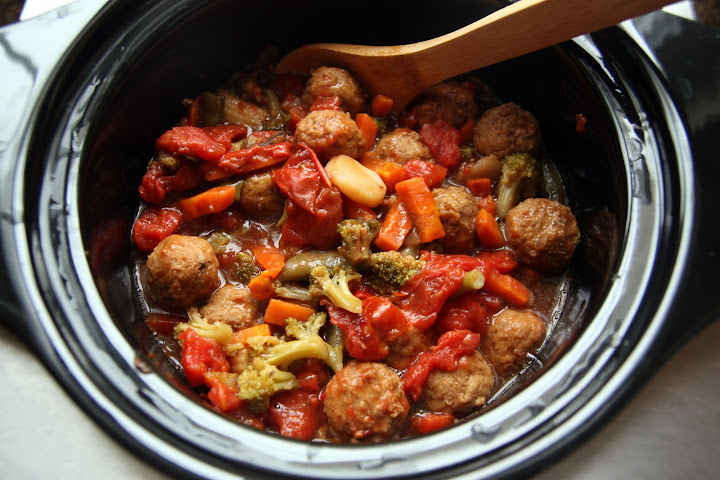 My friend Colleen recognizes the value of the crockpot as much as I do - I'm pretty sure I've said that before!  This stew she posted a few months ago really hit the spot during a snow storm.  I served it plain, but this would go great over egg noodles!
If you want to "lighten up" this meal, use turkey meatballs instead (store-bought or homemade) and low-fat gravy. 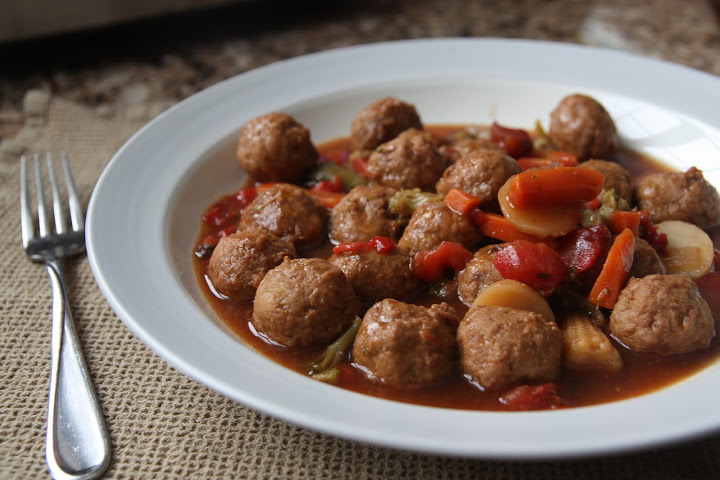 Crockpot Meatball and Vegetable Stew
from Better Homes and Gardens
Place meatballs and frozen vegetables in a 4 quart slow cooker.
In a medium bowl, stir together tomatoes, gravy, water, and basil; pour over meatballs and vegetables.
Cook on LOW for 6-8 hours or HIGH for 3-4 hours.
2 comments:

Email ThisBlogThis!Share to TwitterShare to FacebookShare to Pinterest
Labels: Cooking This and That, Crockpot, Meatballs

I loooove baked potatoes, especially sweet potatoes, but I just don't get home from work early enough to give them the proper baking time.  Many people have success throwing them in the microwave, but for some reason I'm too incompetent to go that route.
I was cooking a roast chicken in the crockpot today and decided I really wanted baked sweet potatoes.  I put the chicken in my 6-quart crockpot and used my new 4-quart for the potatoes.
I pretty much had zero expectations, but these were absolutely delicious.  They were cooked to almost the consistency of mashing them, which was fine with me.  Nice and comforting, they made a perfect companion to roast chicken.
(I kind of feel dumb "claiming" this as my recipe because I didn't really DO anything... also, I have no measurements because I just kind of did it without giving it much thought.) 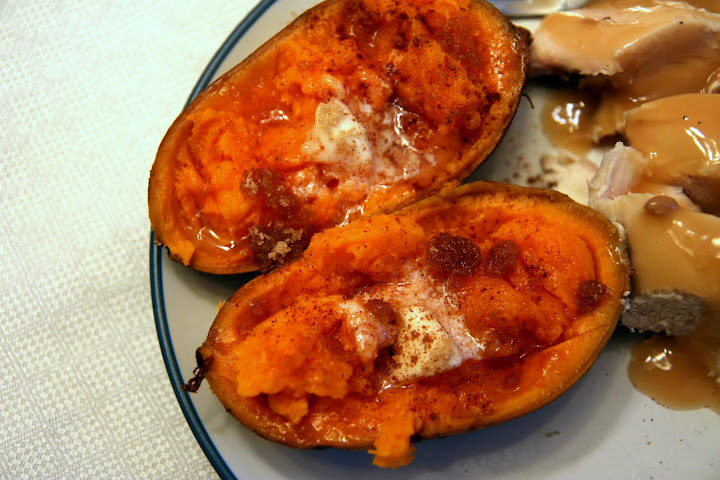 Crockpot-Baked Sweet Potatoes
from Lauren's Kitchen
Scrub and dry the potatoes and stab several times with a fork.  Pile into slow cooker.  Drizzle some olive oil over the potatoes and sprinkle with a couple of healthy shakes of cinnamon.  Cook on low for 6 hours.
Slice open and serve with a little bit of butter and sprinkled brown sugar and cinnamon.
4 comments:

I'm not a bacon fan at all, but I've recently discovered that I do enjoy turkey bacon.  I don't know if it's truly healthier, but I definitely can appreciate the flavor it adds to my meals.
My good friend Jenn made this not too long ago, and though she didn't give it rave reviews, she liked it enough for me to give it a whirl.
Mine didn't look like either Jenn's photo or Cooking Light's, but I suppose that's not unusual.  I agree with Jenn that it is "good but not great" - I do feel like it's lacking something.  I just don't know what... stay tuned for a makeover! 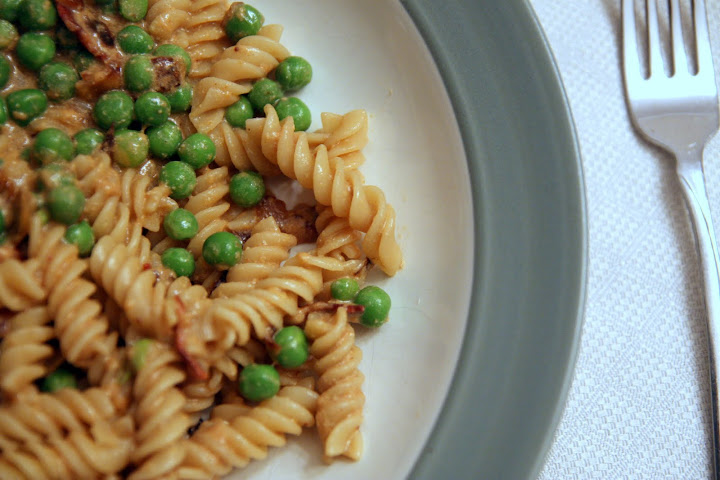 Rotini with Cheese
from Jenn and Food: Perfect Together, who adapted it from Cooking Light

2. Place pan over low heat. Stir in bacon, pasta, and peas; cook for 1 minute or until thoroughly heated, tossing to coat.

Email ThisBlogThis!Share to TwitterShare to FacebookShare to Pinterest
Labels: Bacon, Cooking This and That, Pasta

I say this all the time, but it's really worth repeating; there is NOTHING like working all day and coming home to a yummy-smelling kitchen where dinner is ready and waiting for us. I get embarrassingly excited when a new crockpot meal pops up in my google reader - I use the crockpot several times a week and it's so easy to get bored.
My friend Colleen has a similar love affair with her crockpot, and I know I'll love most of what she posts.  She made this with pork, but I'm not a huge pork fan so I subbed in chicken thighs instead.  Delish! 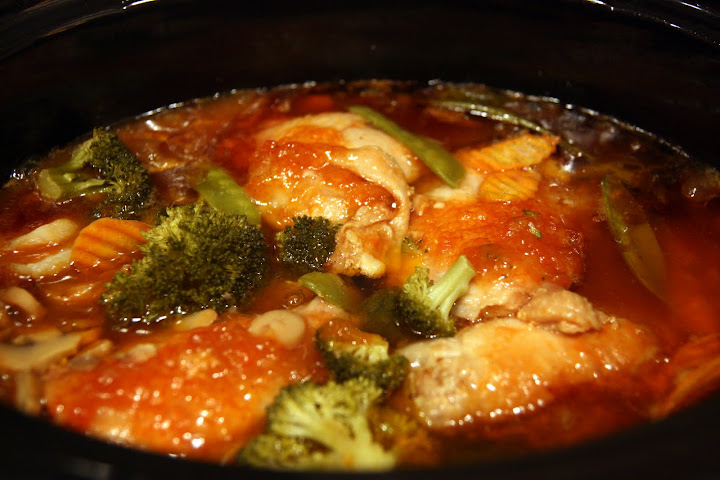 Slow Cooked Asian Style Chicken
slightly adapted from Cooking This and That
Place chicken into 3 1/2-4 quart slow cooker. Sprinkle with tapioca; pour sweet and sour sauce over chicken in cooker.
Cover and cook on low heat for 7 to 8 hours or high heat for 3 1/2 to 4 hours. At the end of 7 to 8 hours, turn to high heat setting and stir in frozen vegetables. Cover and cook for additional 30 to 60 minutes or until vegetables are tender. Serve over hot cooked rice.
2 comments:

Email ThisBlogThis!Share to TwitterShare to FacebookShare to Pinterest
Labels: Chicken, Cooking This and That, Crockpot

Poor Ryan woke up with a fever this morning, so I had an unexpected day off with my guy. It's usually little Danny whose illnesses keep me home from work, but today was Ryan's turn.

Between the sickness and the fluffy snowflakes that fell gracefully for most of the morning and afternoon here in NJ, today was the perfect day to double-up on crockpot cooking. 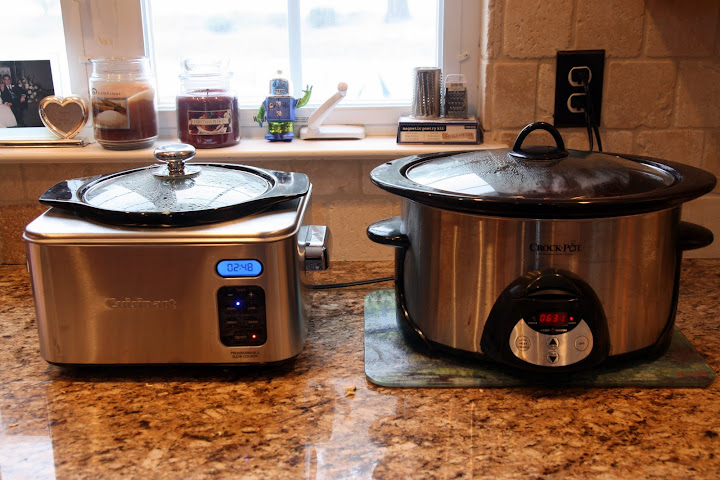 On the right in the bigger pot, I set up some beef stew for dinner, and I used my brand new 4-quart for some delicious creamy soup.

This soup was so unbelievably delicious. I had two bowls for lunch (okay, FINE - three) and even ditched the stew in favor of another big bowl. This might not be the healthiest soup out there, but when it's snowing and you're fending off some kind of cold and your four-year-old has a fever, it hits the spot.

I slightly adjusted the timing/steps of this soup (the original appears below) because I cooked a whole chicken the night before and wanted to use some of that. So I set up the crockpot without the chicken, and added it when I added the roux. 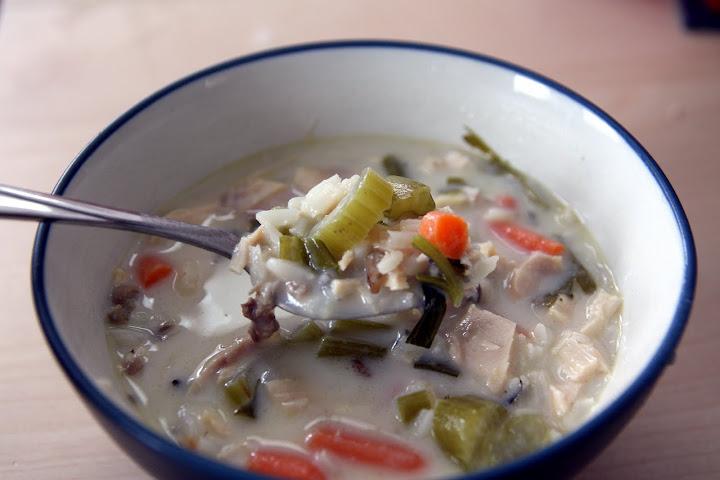 Take out chicken and shred with two forks and then add back into slow cooker.

In a small bowl combine salt, pepper, and flour. In medium saucepan over medium heat, melt butter. Stir in flour mixture by tablespoon to form a roux. Whisk in cream, a little at a time, until fully incorporated and smooth.

Stir cream mixture into slow cooker and then let cook on low for 15 more minutes.
2 comments: