It's the second week of the Superbowl Snack Throwdown, so make sure you head on over to highlowaha and vote for my awesome snack, um, I mean your favorite creation, as well as the next secret ingredient. Voting is open until 8pm CT on Sunday. 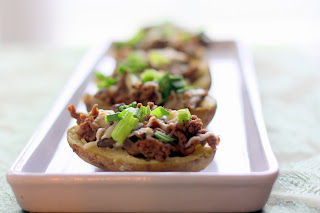 When I was first approached about this competition, I was a little intimidated. As I've stated in the past, I'm a recipe girl. Sure, I'll make adaptations, but I am not someone who can just create something on a whim. Perhaps the biggest challenge for me personally within this competition is to really hone my own creativity and originality in the kitchen.

This week's Superbowl Snack Throwdown ingredient is the mushroom, and my first instinct (as I'm sure anyone's would be) was stuffed mushrooms. But that just seemed so... blah. I really wanted a different kind of snack.

I'm proud to present to you one of the very few recipes that I have created on my own: the marsala potato skin!

I thought these were really delicious. They're kind of a dressed-up twist on an old classic, which is always a fun snack. The skins were delightfully crispy, and the flavor of the filling was very comforting. Who doesn't love the combination of onion and mushroom? 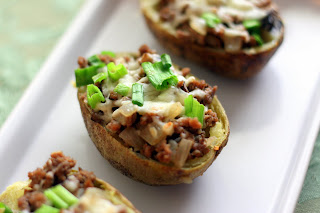 Preheat the oven to 400. Scrub the potatoes and rub with the olive oil. Place on a baking sheet or pan and cook for 45-60 minutes. You want the potatoes pretty cooked, but not mushy.

Increase the heat to 425. When the potatoes are cooled, slice in half length-wise and scoop out most of the insides. Save them and eat them with lots of butter and sour cream tomorrow for lunch.

Place them skin-side-down back on the pan and drizzle with some more olive oil. Bake for another 10-15 minutes. When they're finished, preheat the broiler.

Meanwhile, heat about 2 tablespoons of EVOO over medium-ish heat. Cook the onions and mushrooms for about 5 minutes (until the onions are translucent) and then add the ground beef. Break apart and cook until it's no longer pink.

Add the onion mix and incorporate, and then add the marsala. Cook for about 5 more minutes. If the mixture looks like it could use more liquid, then add some beef broth.

Fill the potato skins with a few spoonfuls of the marsala concoction. Top with a sprinkle of mozzarella, followed by the scallions. Cook under the broiler for about 2 minutes, or until the cheese is all melty.