Kielbasa was the big winner in the very last week of HighLowAha's blogging contest. I must admit that I wasn't super excited about this one, though, because I'm not a fan of kielbasa. Then again, I don't salami either, and that was the other option... so I assumed this would be a lose-lose week. 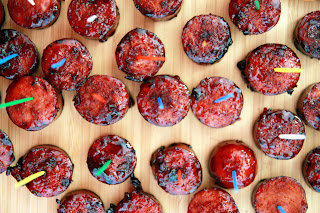 However, even though I don't like kielbasa, I actually rather enjoyed this recipe from my mom and may or may not have even eaten quite a few in between snapping photographs. The carmelization adds such an interesting layer of flavor that leaves little guys rather addictive. And really, who doesn't enjoy food on a stick? 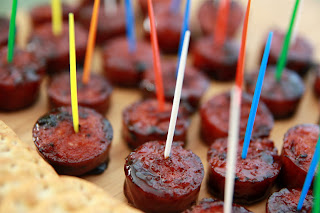 This little appetizer shouldn't even be called a "recipe" - it's just so beyond easy that I almost feel like I'm cheating. It takes a bit of time, but not effort; you can easily leave it while it's on the stove to tend to other tasks or dishes. 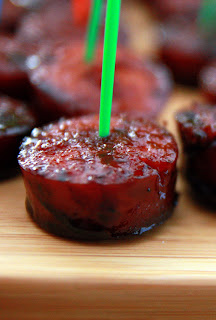 Chop the kielbasa into 1/2" slices. Place in a medium to large skillet and pour the ginger ale over the top. Bring to a slow boil and then simmer until brown and caramelized and all liquid is gone, stirring occasionally - about 45 minutes to an hour.